In the wake of the violent conflicts in Khagrachari and Baghaihat, Rezaul Karim, the minister for land, expressed his view that there was no alternative to land survey for resolving land disputes in the Chittagong Hill Tracts.

In the same vein, after the first meeting held in August 2009, Khademul Islam Chowdhury, chairman of the CHT Land Commission on Settlement of Land Disputes, also underscored the importance of land survey as the first step to resolution of land disputes. He declared that land survey would start very soon.

Therefore, before kicking off land survey, we would like to ask the government and the CHT Land Commission a few questions.

Are you going to carry out land survey in compliance with the CHT Accord?

How can land survey help in resolving land disputes?

Does the Land Commission have consensus on the standards or to demarcate boundaries for ensuring customary land ownership of indigenous communities?

We are afraid that if these questions, among others, are not addressed carefully, all attempts of the Land Commission might end in a fiasco.

Political will of the government is essential in finding a pragmatic solution to the land problem.

The CHT Accord, not land survey, should be the guiding principle in this regard. The government and the Land Commission should consider a few issues with due importance.

First, neither the government nor the Land Commission’s chairman should declare land survey unilaterally; otherwise it might have many ramifications that may not be helpful for trust building.

According to the CHT Accord (Section 2 of Gha) the government has a prerogative to consult the CHT Regional Council before starting land survey.

The government must respect it.

Third, rehabilitating the internally displaced persons (IDP) and returnee indigenous refugees is one of the most important provisions of the CHT Accord.

As per the CHT Accord (Section 2 of Gha), land survey cannot be carried out without rehabilitation of IDPs and returnee refugees.

Fourth, how to negotiate the contradictions between the concepts of the customary land rights and khas lands?

Local laws of the CHT deny the concept of khas land, as indigenous communities follow the customary rules to determine land ownership, which is supported by the CHT Accord.

Therefore, the Land Commission has a mandate to resolve land disputes on the basis of existing laws, customs and systems of the CHT.

Does the Land Commission have an understanding of “existing laws, customs and systems” of CHT?

Fifth, what will be the working relation between the Land Commission and the government, especially the ministry of land, while carrying out land survey in CHT?

As per the Bhumi-Khatian (Parbattya Chattagram) Ordinance, 1984, the main objective of land survey is to prepare Mouza maps and bhumi khatians, or amending the records in bhumi khatians.

What will be the parametres of preparing bhumi-khatians or demarcating the boundaries of lands? In other words, will the government take the “existing laws, customs and systems” of CHT into account as recommended by the Land Commission while carrying out land survey?

If the answer is “no,” the Land Commission might not be able to utilise the outputs of land survey for resolving land disputes.

Sixth, land survey is a bureaucratic and time-consuming exercise. If the Land Commission has to wait until the final output of the survey, it may not achieve its objectives.

Alternatively, the Land Commission might consider starting its work in a specific upazila on pilot basis.

It can deal with the issues on “case by case” basis, and the lessons learnt from this “case management” can be replicated in other areas of the CHT.

Seventh, land survey alone cannot be a means of resolving the land disputes.

To support the work of the Land Commission, it is essential to strengthen other ancillary CHT institutions — the CHT Regional Council, Hill District Councils, and the Task Force on Rehabilitation of Returnee Refugees and Internally Displaced Persons.

As per the commitments of the CHT Accord, the government must empower the Hill Councils by devolving powers to them so that they can discharge services to the people.

Eighth, effective coordination and support between the civil and military administrations are necessary.

The government must make sure that the army plays an impartial role and does not associate itself with the politically sensitive settlement program of the Bengali settlers.

At the same time, the government might consider forming a mixed police force to assist the civil administration in keeping law and order in CHT.

Finally, it is needless to say that resolution of land disputes is an ethical and political exercise.

Indigenous peoples are politically too marginalised to influence the top decision-making process of the government.

Therefore, we ask the government and the Land Commission not to take a unilateral decision with regards to land survey.

The government must respect the CHT Accord and have patience to listen to the CHT people for creating an inclusive environment.

Topic: cht accord, CHT regional council, Conflict Resolution, indigenous refugees, Land Commission, Land Commission on Settlement, Land Disputes, land survey for resolving land disputes, Land Survey in CHT, political consensus on the modalities
The articles published in Jumjournal may lead to informational errors or you may have disagreements with any of the articles. You can also write in jumjournal with your opinion or send us your writing with correct information. To send us your write up or If you have any inquiry please contact - jumjournal@gmail.com 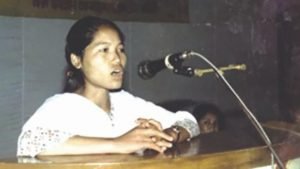 We Owe it to Kalpana Chakma